Tourists from Moldavia found a babykitten in Limenaria. They took care of it and bottle fed it until they had to go home and then asked for our help. Although we are all full with kittens and injured or sick  cats we still tried to find a solution which we found in Sibylle. As we all know she has a big heart for the animals and she took the little one in her care.

The tourist brought the kitten to her and left some money for food.

We thank Alexander and family for caring and donating! 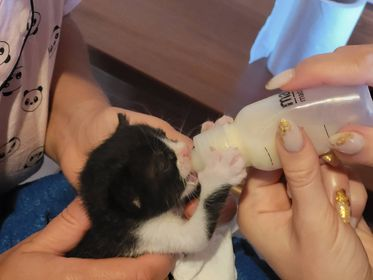 In early September, setter Glen was rushed to the vet because he had a red and swollen penis. There it turned out that flies had laid eggs and the maggots were now feeding on his meat (beware of flies people)!

All maggots and affected flesh were removed under anesthesia and the wound was thoroughly cleaned. The next day he was able to return to the shelter with the necessary medicines.

A week later he was suddenly not well, he just layed and did not want to eat. His gums looked pale. Back to the vet as soon as possible. The wound on the penis looked good, so it couldn't be that. Blood tests and a quadruple test for Mediterranean diseases were performed. Except for a slightly lowered hematocrit, nothing obvious emerged.

Tanja took him home so that he would be supervised and there he actually ate something. The next day (Thursday) he started vomiting violently several times and stopped eating.

Additional tests were done for blood levels of liver and kidneys. That too was all normal. To keep his fluids up, he went to Giannis on a drip in the evening and was given medicine to keep his stomach calm. Nothing helped, he continued to vomit every now and then and Sunday morning he clearly started to be in pain. Giannis came to give him a painkiller and in the afternoon Tanja drove him to vet Lovolina in Potamia for an x-ray in the hope that something would become clear. Lovolina suspected something on or around the spleen (enlarged? tumor?) but couldn't determine what without ultrasound. Once home, Glen could only sleep with fatigue, but by midnight he began to moan and scream in pain. Giannis came again with a stronger painkiller.

On Monday, both vets had contact with vet Kiki Tsakou in Xanthi. Glen could be better helped in the more extensive clinic there. He was able to come that same day and Jürgen delivered him there late in the afternoon. After various examinations, he was operated on that same evening and it turned out that a piece of rope or yarn was wrapped around his intestines, causing them to be pinched. A piece was removed and he came out of surgery well. He has to stay for a few more days, but now he is eating normally again.

It looks like things are going to end well for Glen.

In this hectic week, many people have committed themselves to Glen, to whom we would like to thank:

Karem, who picked him up twice at the shelter and brought him to Giannis

Giannis, who even came to give painkillers at midnight

Lovolina, who made time for X-rays on Sunday afternoon

Tanja, who took him home and brought him to Potamia twice

Jürgen, who was immediately ready to take him to Xanthi without hesitation.

The operation and all additional costs will of course create a considerable hole in our budget, but there was no time to set up a fundraising first.

We hope you can help us with a small donation. If even half of our followers donated € 5 each, the costs would probably be covered.

You can donate with PayPal:

Glen at the vet's clinic

One evening, a few days ago, some boys from the village came to Tanja's house. They had found a little kitten on the street. It had been crying for 2 hours and no sign of the mothercat. They told that they had asked several people to take the kitten, but with no result. Someone suggested to ask kyria Tanja...

The truth is that Tanja could not take any more cats, but what do you do when children that at least care about an animal and try to save it, are standing on your doorstep??? They are the future, they need to learn and understand that it is good to help the animals in need! So she decided to invest in the future and took the little one in. Fortunately it was healthy and already able to eat by itself.

If you can help us with a small donation towards flea/worm treatment, food and future castration it would be very much appreciated.

Here you can find how: 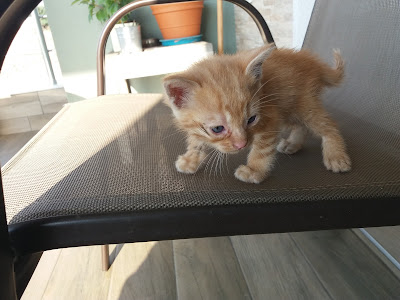 Saturday we got a message from tourists about an injured kitten on a small beach towards Trypiti. Later the cat disappeared. Sunday other tourists sent a message about the same cat. Luckily Tanja could go there straight away to take the cat. It was clear that it had broken front legs, it was dehydrated and very skinny but still alive.

Today we took the kitten to the vet. It had both front legs broken on multiple places and the vet thinks it is like that for weeks because one part was already growing (the wrong way) together. One leg could have been saved, if it didn't have a severe deep infection from dragging.

We would have loved to save an animal with such a strong will to live and with 3 legs a cat can live without any problem, but the risk that the other leg had to be amputated as well was too big. So to prevend her from more suffering we decided to put her to sleep.

We thank both tourists for caring, thanks to them at least her last days were in peace with water, food and a quiet place to sleep. 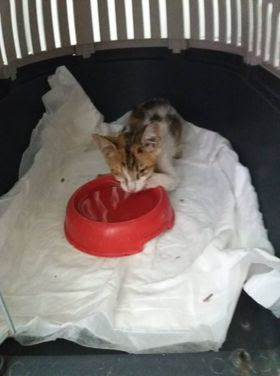 We are so grateful for the tourists that reach out to us for help, but also actually do something themselves!

Romanian tourists found a kitten with infected eyes and asked us where the closest vet was. They took it to Konstantina (who is an angel they told us later 😉) who treated the cat and luckily the eyes could be saved. The tourists paid the bill and medicins but it needed some days therapy so it could not return to the streets.

While we were searching for someone to take care of the kitten, the tourists reported us that the owner of their accommodation would take the kitten and take care of it!

We have no idea who or where this is, but if you read this, please contact us by the time the cat is old enough for castration and we will help you with that.

Good things can happen if we all work together 😃 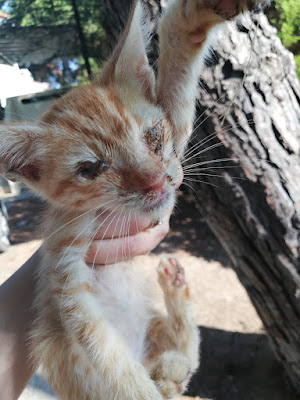 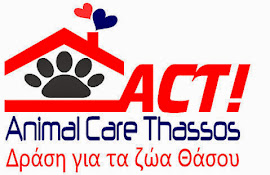 The account number can be found at the page About Us